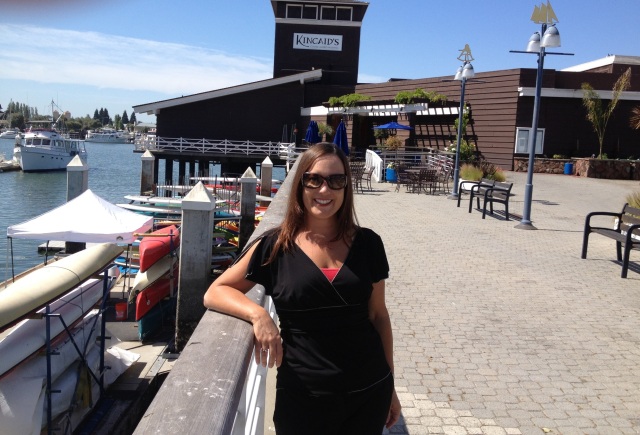 While in the Bay Area, you must make a stop at Jack London Square in Oakland, CA.

I happened to be there in May on a gorgeous day, as I walked the pier and watched the boats sail by. There is a parking garage right at the square which is convenient to park in . All of the restaurants are on the pier and most of them have a view. While many of the places are pricey, we were able to find items on the dinner menu at Kincaid’s Bay House Restaurant for under $25.00, which is a great deal. Items under $25.00 include: Seafood Louis Salad, Seared Peppercorn New York Steak (petite), Char Broiled Chophouse Burger, Wild Mushroom Ravioli with Braised Short Rib, Smoked Chicken Penne, Rigatoni Bolognese, Fresh Herb Stuffed Chicken, and Roasted Chicken Dijon. All of their soups and salads are under $9.00 with the exception of the Seafood Louis. 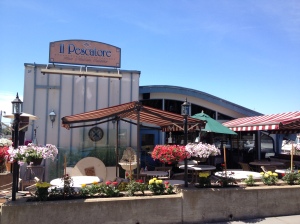 When you first sit down, an herb crusted loaf of fresh, hot bread is brought to the table. As you eat the bread, more comes out! You really could order a salad there and just fill up on a glass of wine and their complimentary bread.

In the center of Jack London Square is the Jack London Market, a six-story building with ocean view on every floor. The first two floors will be a daily farmer’s market overflowing with the area’s best fruits, vegetables, meat, seafood, coffee, baked goods, cheese and prepared foods.  The Market will also be a great place for lunch with a glass of wine, culinary shopping, events and education. The open date has not yet been announced.

Jack London is most famous for being an author of The Call of the Wild, White Fang, and The Sea Wolf. He was one of the first Americans to make a living from writing books.

The waterfront is known as Jack London Square because this is where Jack spent time as a boy where the ideas for the oyster pirate and sailor inspired stories like The Sea-Wolf came from. There is a life sized bronze stature of Jack London standing watch over the waterfront at the foot of Broadway. This bronze sculpture was created by the artist Cedric Wentworth.

Some of the fine restaurants at Jack London Square are:

$$ saving tips: Many of the restaurants at Jack London Square are pricey. Be sure to preview the menus in advance if you don’t want to pay $50 per person for the meal alone. Since the restaurants are ocean front, it is a typical high priced menu. However, you don’t want to miss out on the experience of eating their amazing bread as the boats sail by. The first couple of places we went to had wait times of over 2 hours and then we stumbled upon Kindcaid’s thinking it would be way too expensive. Surprisingly, they have a very diverse menu and price range.  I ordered the Wild Mushroom Ravioli with Braised Short Rib which was so large I could have split it with someone. The rib was an entire boneless, rib served with a generous portion of ravioli. I highly recommend that dish.