Throughout the Mediterranean our kids flipped out over gelato!! Everywhere we went, they wanted more and more. In Florence, Italy our daughter ate gelato three times in one day which is not cheap.

Gelato is the Italian word for ice cream, but is it really the same thing as ice cream??? Gelato refers to varieties of ice cream made in a traditional Italian style. Gelato is made with milk, cream, various sugars, and flavoring such as fresh fruit and nut purees. Often times you will see it served in a glass as a parfait or in a dish with whole fruits. In the picture above the gelato is displayed in parfaits. Whether in a cup, on a cone or in a dish~ It’s all amazing!!!

First you must know the gelato lingo!!! Gelati is plural for gelato and Gelateria is where geltao is sold.

Money saving tips: We ate gelato all along the Mediterranean. Be sure to look around and price out the gelato as some gelaterias are located on the same block for twice as much and the one next door. At Piazza Navona in Rome for example, gelato is priced very high within the piazza but if you step a block outside of the piazza you can find it much cheaper and just as good! It’s the same for paella in Spain or wood burning oven pizzas in Rome. When visiting Barcelona, the Mercat de Sant Josep de la Boqueria (The Market) has amazing gelato for much cheaper than purchasing on La Rambla. If you would like to read more about The Market, click on the link Mercat de Sant Josep de la Boqueria on the right hand side under “topics”.

What makes gelato different from ice cream? Gelato is a type of soft ice cream which contains a relatively small amount of air. Gelato in Italy must have at least 3.5% butterfat. The sugar content in homemade gelato, as in ice cream, is balanced with the water content to act as an anti-freeze to prevent it from freezing solid. Several types of sugar are used including sucrose, dextrose, and inverted sugar to control sweetness. Typically, gelato—like any other ice cream—needs a stabilizing base. Egg yolks are used in yellow custard-based gelato flavors, including zabaione (an Italian dessert, or sometimes a beverage, made with egg yolks, sugar, and a sweet wine) and creme caramel, and non-fat milk solids are also added to gelato to stabilize the base. Starches and gums, especially corn starch, are often used to thicken and stabilize the mix. 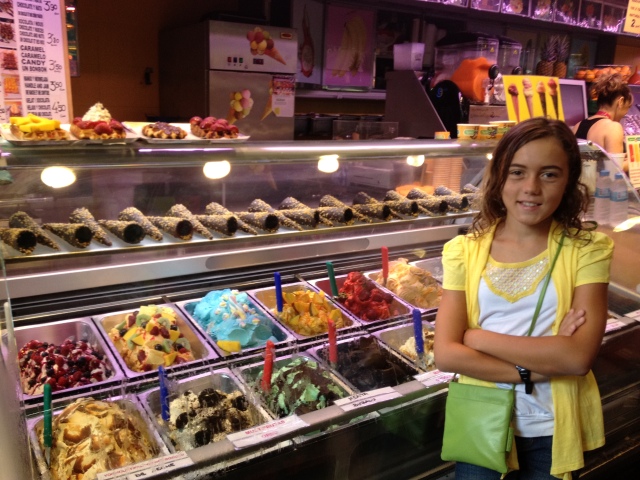 Facts about Gelato~ In the United States there isn’t a standard of definition for gelato set forth by the U.S. Department of Agriculture, as there is for ice cream. Ice cream in the U.S. is defined by the Federal Code both by its ingredients, which includes milk fat of 10% or more, gelato in the U.S. covers a wide range of products including frozen desserts eaten like ice cream; products that are identical to ice cream with the exception of their butterfat contents; and premium ice cream containing butterfat far exceeding the minimums set forth in Italy. Recipes will vary as will the person making it, but most dairy gelato contains 16–24% sugar. Whereas, ice cream in the United States contains 12 to 16% sugar.

Where does gelato come from? The history of gelato dates back to frozen desserts in Sicily, ancient Rome and Egypt which were made from snow and ice brought down from mountaintops and preserved below ground. Then, frozen desserts appeared during banquets at the Medici court in Florence. Bernardo Buontalenti, the Florentine cook, is said to have invented modern ice cream in 1565. He presented his recipe and his innovative refrigerating techniques to Catherine de’ Medici, who in turn brought the novelty to France as Queen consort. In 1686 the Sicilian fisherman Francesco Procopio dei Coltelli perfected the first ice cream machine. Gelato increased in popularity in the 1920s–1930s in the northern Italian city of Varese, where the first gelato cart was developed!!

Interesting Gelato Stat: Italy is the only country where the market share of handmade gelato versus industrial one is over 55%. More than 5,000 modern Italian ice cream parlors employ over 15,000 people today, mostly Italians.

Want to make your own gelato??? 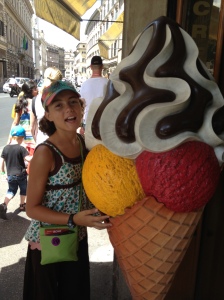 Making gelato is similar to making ice cream. There are several steps involved. The mixture for gelato is typically prepared using a hot process first, dissolving sugars. White base is heated to 185 °F completing a pasteurization program. The hot process to make chocolate gelato is basically the same for ice cream and is traditionally flavored with cocoa powder and cocoa butter.

Gelato and some premium ice creams are so dense that they require a slightly higher serving temperature. This is the perfect point in which your scoop is firm but not hard and not so soft that it melts immediately. Gelato recipes usually include more egg yolks, more milk and less cream than ice cream. It actually has less fat than regular ice cream. Gelato’s low overrun (less air) makes for an extremely dense, rich and creamy treat that we all love.

Sorbets are all about the fruit, fruit, fruit. With the absence of milk, cream or eggs, they depend only on sugar, lemon juice and fresh fruit for flavor. Elegantly simple and refreshingly tart, sorbets were the rage during Victorian years, when they were served as palate cleansers between rich, heavy courses. A sorbetto, the more intense Italian version, generally has more fruit and less water, resulting in a softer, less icy texture. Sorbet is all about the FRESH fruit.

In a saucepan combine the milk, cream, and 1/2 cup sugar over medium heat. Cook until the sugar dissolves, about 5 minutes.

Meanwhile, in a medium bowl whip the egg yolks with the remaining sugar using an electric mixer until the eggs have become thick and pale yellow, about 4 minutes. Pour 1/2 cup of the warm milk and cream mixture into the egg mixture and stir. Add this mixture back into the saucepan. Cook over very low heat, stirring constantly, until the mixture becomes thick enough to coat the back of a wooden spoon, about 7 to 10 minutes.

Place a strainer over a medium bowl and pour the warm custard mixture through the strainer. Stir in the vanilla and hazelnut spread until it dissolves. Chill mixture completely before pouring into an ice cream maker and follow manufacturer’s instructions to freeze. To serve, scoop gelato into serving bowls and top with hazelnuts.

What type of gelato maker should you buy? Gelato makers can run anywhere from $22.00 – $1200 depending on the brand, size and features. De Longhi GM6000 Gelator Maker with Self-Refrigerating Compressor will cost you about $300! Cuisinart ICE-100 compressor is both an ice cream maker and gelato maker which runs about $251. If you own a KitchenAid mixer, there is an attachment for ice cream which is $85.00. Be sure to research before purchase, check out ratings and read reviews as some of the ice cream makers are for both ice and gelato while others are for frozen yogurt and sorbets. Gelato is made to perfection at a slightly lower temperature than ice cream in Italian Gelaterias; however, it can still be made at home using an ice cream maker.

According to World of Ice Cream, here is the equation for gelato: 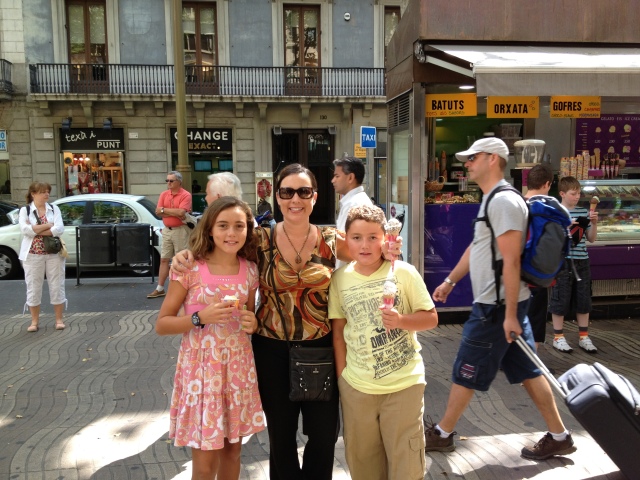