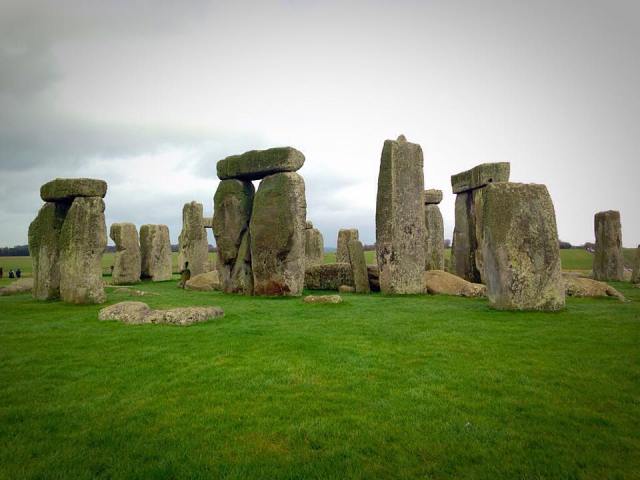 There are no accidents, only unsolved mysteries

Stonehenge is actually a bucket list item for my husband. I have seen many documentaries on The History Channel, National Geographic and Travel Channels. While visiting London, we decided to schedule a tour two hours away to Stonehenge. It was a dreary day in December with blistering wind and mist. I highly recommend booking a tour if staying in London to take in the scenery along the way and enjoy a beverage without the worry of driving and directions. We hopped on a tour bus that picked us up at a nearby hotel and stopped at two other sights along the way to include Windsor Castle and the town of Bath. 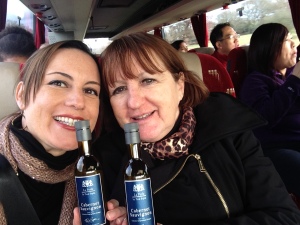 There are so many stories and hypotheses about Stonehenge as the site was created by a culture that didn’t use any written documents.

Stonehenge’s ring of standing stones are located in Wiltshire, England. It is believed that Stonehenge was created 3000-2000 BC. The earliest phase of Stonehenge was the circular earth bank and ditch dating back to 3100BC. It is a mystery how the bluestones, also known as spotted dolerite, were brought 200 miles, from the Preseli Hills of Southwest Wales, to the area of Stonehenge.  Each stone weighs several tons and some predict the stones were transported by dragging while others believe they were possibly floated over water or a glacial act. The bluestones were present from the beginning phases and throughout the completion of Stonehenge. Stonehenge is thought to have possibly been a burial ground in the beginning, as human bones were found during the digging of the ditch dating back to 3000 BC. There is no evidence of how the stones were constructed to design Stonehenge and this is why there is so much fascination around the mystery. Many have suggested that the construction was supernatural due to the size and weight of the stones which would make it impossible for humans to have relocated them 200+ miles without a wheel or pulley system. In 1995 a team of 100 people decided to conduct an experiment using a sleigh along a animal fat-greased track carrying a 40 ton stone which was successful for 18 miles.

Interesting Facts~ Stonehenge has been legally protected since 1882. In 1986, the site was added to UNESCO’s list of World Heritage Sites. Stonehenge is owned by the Commonwealth and managed by English Heritage Trust. The site is aligned facing the sunset of the winter solstice and the sunrise of the summer solstice. The design allows for a celestial observatory, which some believe was for the purpose of predicting the eclipse, solstice, equinox and other events of importance at that time.

There are newer theories which have surfaced to include the idea that Stonehenge was a place of healing, thus explaining the high number of burials. The thought isn’t that it was only a burial but more a of a multifunctional worship area. Analysis shows that remains have been found from other regions. Another theory is that Stonehenge may have been part of a ritual landscape to celebrate the past and recently deceased.

One of my most memorable observations was the size of Stonehenge. I had expected the stones to be much larger and taller than they were. Looking up towards the top of the formations is an awesome sight. It is mindboggling how the rocks sit on top of each other and have remained there, perfectly still all this time. The ring also seemed much smaller than it looks on documentaries. It was very quiet at the site, even though it was packed with tourists.

$$ Saving Tips~ You can walk along the grounds without paying for the guided tour or listening to a headset. If you’re visiting the site during the winter, be sure to bring an umbrella, jacket, scarf and gloves. We were SO cold, to the point of misery! We purchased souvenirs in the gift shop to bring back. I try to collect an ornament from each place that I visit. I was pleased that they sold a cloth ornament of Stonehenge which I could easily pack and bring home. 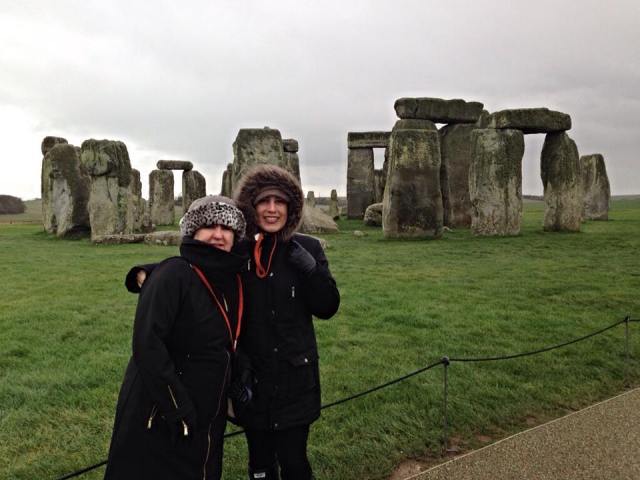 “Travel changes you. As you move through this life and this world you change things slightly, you leave marks behind, however small. And in return, life- and travel-leaves marks on you.” ~ Anthony Bourdain