Pealla on the Wharf in Barcelona

Our son fell in love with Paella while in Barcelona!!!! He loves seafood and rice- so this was a dish come true for him. What exactly is Paella?

Paella is a Valencian rice dish which came about in the mid-19th century near lake Albufera, a lagoon in Valencia, on the east coast of Spain. Many non-Spaniards view paella as Spain’s national dish.  Most Spaniards consider it to be a regional Valencian dish. Valencians, in turn, regard paella as one of their identifying symbols. So it is a dish shared amongst many regions and many people but commonly served in Spain.

This dish is named after the two-handled pan it’s cooked in. The 15-inch paella pan has a wide surface area which ensures that the rice cooks in a thin, even layer.There are three common types of paella: Valencian paella, seafood paella and mixed paella, but there are many others as well. The key to this dish is the crusty caramelized layer of rice, called socarrat, that forms on the bottom of the pan. Valencian paella consists of white rice, green vegetables, meat  such as: rabbit, chicken, duck, land snails- beans and seasoning. 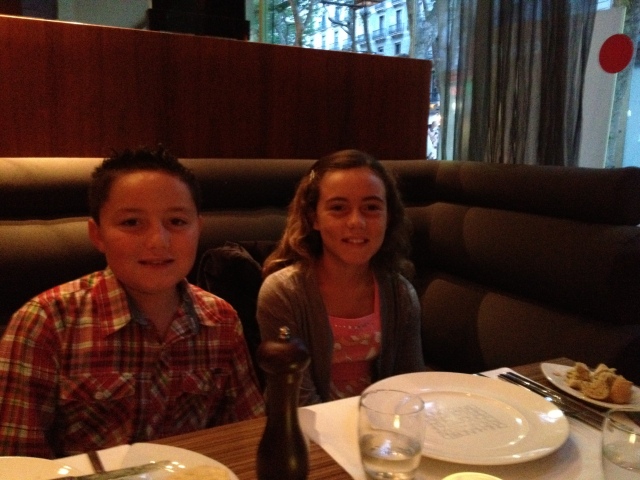 Mixed paella is a free-style combination of land animals, seafood, vegetables, and sometimes beans. The key ingredients include saffron and olive oil. 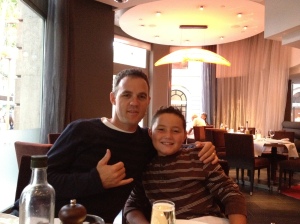 Our son was on a mission to try Paella all over Barcelona. Each version greatly differed. The first place that he ordered Paella was at the Le Meridien Barcelona Hotel on La Rambla. While this is a Jean Georges restaurant which is usually 5 Star and quite pricey, their portions were large and not too expensive considering we sat in the window on La Rambla. We love to sit and watch all of the passerby’s at night. Of course in Spain, dinner doesn’t really start until 9ish and goes until very late!!! The Paella at CentOnze was € 22.50 for a large, adult sized portion. Pretty reasonable for the amount of seafood in the dish including a giant crustacean on the top. We highly recommend this restaurant for price, ambiance and food quality.

About Jean Georges Vongerichen: He was born in the Alsace and studied in France. He started his career in le Méridien Singapore and very soon after, he open 10 restaurants in the same area. In 1985, he decided to go to New York and he won 4 stars of The New York Times when he was only 29 years old.

He opened restaurants in Boston, Hawaii, Las Vegas, Chicago, London, Paris, Bahamas and Shanghai. Currently he possesses 12 stars in The New York Times thanks to his 4 restaurants in New York (Jojo, Vong, Jean Georges and The Mercer Kitchen).

The Fast Food of Paella- GROSS!!!

Don’t make the same mistake we did. Our son wanted Paella one last time prior to leaving Barcelona, so we went looking for it. As we walked down a street in Barcelona that the bus dropped us off at, we came across a sign with a picture of Paella. After walking quite a ways and so hungry, we just stopped off at a pizza place which also served Paella. That was probably our sign- pizza and Paella? When it came out, it looked like sticky yellow rice with a bag of frozen peas and a disgusting chicken drumstick. We were actually afraid to let him eat it but he was so hungry. The restaurant was clean, very metro and the rest of us had great food. The Paella was comparable to fast food. Paella in Spain is much like “wood burning stove pizza in Rome” every restaurant swears by it. We paid about € 12.00 for it and it wasn’t worth € 2.00. It actually made us sick looking at it. Most Paella has mussels, shrimp, clams and other seafood such as fish, calamari or crustaceans. As you can see from the picture – this Paella had none of those- just a chicken bone.

“Mejillones” (mussels) in Barcelona are everywhere!!! After having his fill of Paella, he moved on to mussels.

How to eat mussels

Spain has tapas everywhere -so we took full advantage of sampling tapas around town. As you can see in the picture of the Tapas sign- mussels were only € 3.30. That’s so cheap!!! Many of the restaurants in Spain have menus posted on the sidewalk and many of them offer outside seating.

In Spain, mussels are consumed mostly steam cooked, boiled in white wine, onion and herbs, and served with the remaining water and some lemon. Mussels are commonly served as “tigres” in Spain, a croquette using the mussel meat, shrimps and other pieces of fish in a thick bechamel then breaded and fried in the clean mussel shell.

Mussels are also used in other varieties such as rices or soups or commonly eaten canned in a pickling brine made of oil, vinegar, peppercorns, bay leaves and paprika. 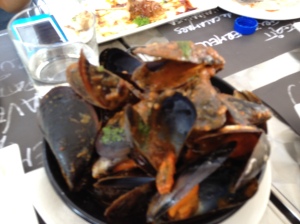 Patatas Bravas: also called patatas a la brava or papas bravas, is a dish native to Spain and often served as a tapa in bars. It is made up of white potatoes that have been cut into about 2 centimeter irregular shapes and then fried in oil and served warm with a sauce such as a spicy tomato sauce or a mayonnaise. In the picture you will see that they were served with a white cream dollop which was similiar to a crème fraîche (lighter, less sour than our sour cream in the US). This dish is commonly served in restaurants and bars throughout Spain, where it is traditionally paired with a shot of orujo or a glass of wine. It is one of the most spicy dishes served in Spain. Yummy is all I can say!!!

$$ saving tips: Tapas can be extremely pricey!!! The first place that we sat down to for tapas in Barcelona handed us a bill for € 150.00 (times that by .30 for US dollars). What not to do when ordering tapas- if the waiter ask or tells you “I will bring a sampler of tapas” say no! Be sure to look at the menu prior to entering a tapas restaurant. We were drawn in because it looked like a happening place, dishes clanking, lots of people inside, wine glasses and smelled great. We didn’t look at the menu first and accepted the tapas sampler. We had just gotten off of a plane, tired after traveling 22 hours. Won’t make that mistake again. The menu in the picture indicates that there are affordable places which have a vast variety of tapas. Tapas are great because they are small and not really filling so we can restaurant hop along the side walk cafes and try all kinds of food. Tapas are also cheaper during the day!

Paella goes well with Sangria!!! Be sure to check out the Sangria page of the blog by choosing the link in the right hand column called “Sangria”. When ordering Paella, look at the quality as well as the price. We happened to find great Paella in a high end restaurant affordably prices and equally as good Paella on the waterfront in Barcelona. In our experience, if there is a picture of the item on the menu – it is probably more a fast food type of Paella. Try Paella in Spain and then make it yourself at home!!