While visiting Paris, The Palace of Versailles was top on our list of sites to see. I grew up following my mom around from home tour to home tour, and listening to Lifestyles of the Rich and Famous playing in the background, so maybe it is in my blood? When I became an adult, I loved attending home tours put on by benefits and charities. To this day, I am fascinated by palaces and mansions.

Plan on taking your time going through Versailles. Don’t plan Versailles and other sites on the same day. Similiar to that of the Lourve, Windsor Castle, or Vatican, it is not something you can rush through.

The Palace of Versailles is located 13 miles outside of Paris which takes approximately 38 minutes by car. It is a World Heritage Site and noted as a great achievement of French 17th century art. To say that this blog post covers a fraction of the Palace would be a gross exaggeration. To put it in perspective, the Palace is capable of holding up to 20,000 people, 700 rooms, more than 2,000 windows, 1,250 fireplaces, and 67 staircases, spread over 26,000 acres. Throughout the years, Versailles has undergone many phases of restoration and construction. I won’t dive too deep into the various renovations. I recommend booking a tour to avoid the overwhelming feeling when you step foot onto grounds and ask yourself, “Where do I begin?” We booked a tour which included transportation to and from Paris. The great thing about group tours is that generally, they include free time to explore. 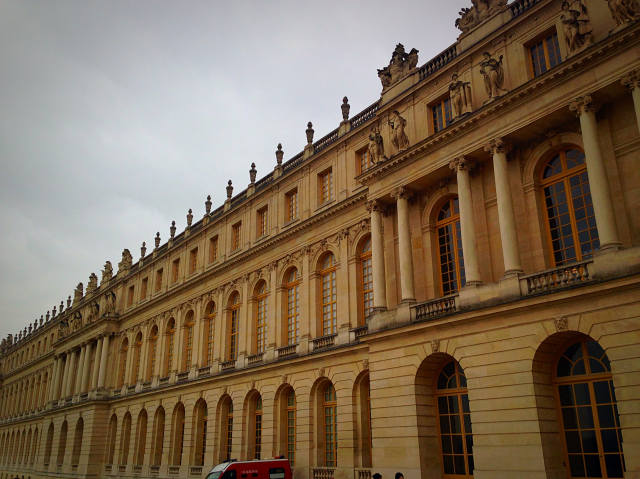 I love the picture above so much, that it is the screen saver on my laptop to which I view daily. One thing to note, we toured the Palace of Versailles in December and from the pictures it was overcast, gloomy and cold. I always use my own photographs when blogging, which takes me right back to the exact moment, temperature of the day and experience. I travel vicariously through my own memories via photographs.

If planning a trip to Versailles, do research to consider the best time of year, weather and crowds. I loved visiting the Palace in December. While I don’t have any other time of year to compare it to, I can say that it was not crowded. There is something magical about entering the palace, bundled up in heavy coats and boots with gloomy skies. The only disadvantage I can think of, is that we were too cold to spend much time walking about the beautiful gardens.

Background~ When the château was built, Versailles was just a small village in the 11th century. Today, Versailles is a wealthy area outside of Paris. The fascination with the palace is not just its mere grandeur, it is the history of political power, The French Revolution, Louis XIV and the royal family dating back to 1682.

The picture above is the Gate of Honor which can be seen from the three main avenues that meet to form the Place d’Armes. 10 million people walk through this gate annually to tour the estate! The original gate was made of 80m of wrought iron and gold leaf. The picture above is an exact replica which cost £4 million, over two years to contruct and 100,000 gold leaves formed in the shape of crowns, makes of Apollo, and cornucopia. The original Gate of Honour was created in the 1680’s.

The grand appartement de la reine was the residence of three queens of France to include Marie Therese d’Autriche, Marie Leszczynska, and Marie-Antoinette. The apartment represented heroines from years past while adding balance to the room’s decor.  The apartment consisted of seven rooms with doorways in line on the left-wing while the right-wing was almost an exact layout of the grand appartement du roi. 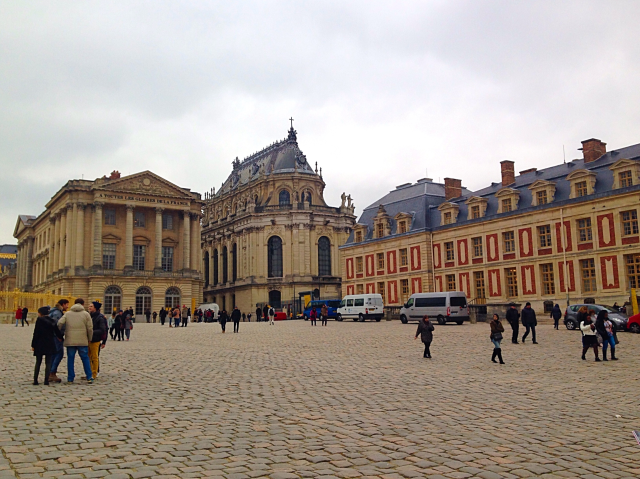 The palace has a massive cobblestone courtyard, above, which opens up to gorgeous, detailed, architecturally designed buildings to make up the Ministers Courtyard. The name represents the two long ministerial buildings standing on either side. The Versailles chapel, located in the center of the courtyard is assessable from inside the palace. I enjoyed walking through the courtyard and looking up, taking in the size and detail of each structure.

Bronze Statue of the Rhone River

Fe Brun and Le Nôtre collaborated on the numerous fountains at the palace.

The Mercury Room, also known as the Mercury Salon, is located in the King’s Grand Apartment. The room is fascinating as it houses the original, royal bedchamber in the State Apartments. It is referred to as “the bedroom”. The room is decorated with tables, mirrors, andirons (metal supports that hold wood in a fire-place) and chandeliers made of silver. The nook is separated from the rest of the room by a terrace made of silver. While much of the furniture in the Mercury Room has been recreated, the bed is the original bed that was placed by Louis-Philippe when he transformed Versailles from a royal residence into a museum.

The Palace of Versailles, as we know it today, was completed by the death of Louis XIV in 1715. There are two enormous asymmetrical wings on either side of the Royal Court totaling 1,319 ft in length.

Chapels at Versailles~ I love touring cathedrals and chapels throughout Europe, taking in the columns, colored marble, ornate detail throughout, and of course the murals. The ceiling in the chapel is breathtaking.

Since the palace began, five versions of the chapel at Versailles have evolved. The current chapel, located at the south end of the north wing, is The Chapel of the Palace of Versailles, the last major project for Louis XIV. The Chapel represents French Baroque architecture and ministerial decoration. The Chapel was dedicated to Saint Louis, patron saint of the Bourbons.

The Hall of Mirrors~ I have to say the most popular room seems to be The Hall of Mirrors, whose construction began in 1678. The picture does not do it justice. Obtaining a picture without anyone in it is nearly an impossible feat! As you can see, I managed between the tours. The official name is ~ The Galerie des Glaces, perhaps the most celebrated room in the château of Versailles. Jules Hardouin-Mansart replaced Le Vau’s large terrace, facing the garden on the west, with the most famous room of the palace, the Hall of Mirrors. The Hall of Mirrors north side displays art work inspired by the Salon of War, depicting the king’s victory against a European coalition.  While the south side of the Hall, displays art work inspired by a Salon of Peace. It is famous for many of the ceremonies of the French Court during the Ancient Regime. There are numerous renditions around the world, but there is only one Hall of Mirrors. Comparable to being in Florence and settling for the replica of the Statue of David.

The Gardens of Versailles~ The gardens represent a French formal garden known as jardin à la française. The garden has a specific style in a way of calling nature to order. Notice the symmetric lines, the garden was designed by Andre Le Notre for Louis XIV. We would have loved to have spent more time exploring the gardens but it was so cold in December. Nonetheless, they were very beautiful even in December.

Interesting Facts~ 181 films have been shot at the Palace of Versailles. A television series called Versailles set during the construction of the Palace in Louis XIV’s reign premiered on November 16, 2015 in France and later in Canada, Britain and the U.S. Dior filmed one of the most glamorous commercials in the Hall of Mirrors featuring actress Charlize Theron advertising the fragrance J’Adore at the Palace of Versailles in 2012 to Depeche Mode’s song Enjoy the Silence.

Versailles is definitely worth the time that it takes to tour the grounds. Make a day of it!