As we ventured off to California for an Ironman, we thought it would be fun to schedule a wine tour. We’ve always wanted to ride the wine train along vineyards. After calling several wine tour companies, we were told the minimum age was 21, which posed a problem as our daughter is 17. We researched further and stumbled upon a Sonoma Food Tour that our daughter could enjoy as well.

First stop, the Depot Hotel, which is no longer a hotel, yet a fabulous, Italian 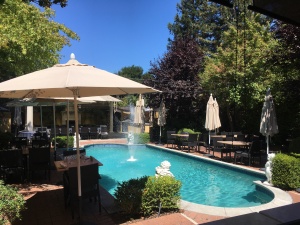 restaurant. The owner of the restaurant was born in Little Italy and purchased the building in 1985. He and his wife have a cooking school and own three other restaurants in the San Francisco Bay Area. The tour began at the hotel located at 241 1st St W in Sonoma. The meeting point was on a cute bench located in front of the restaurant entrance. We sat outside in a shaded patio area with a beautiful pool and relaxing sounds of a fountain. The chef came out and presented two types of pizza, the Amatriciana and Amalfi- oh how I love anchovies. It was wonderful to sit poolside, sipping wine, eating pizza and getting to know others on the tour. Had we stayed in Sonoma, we would have booked a reservation at the Depot Hotel Restaurant for dinner.

On our walk, we stopped in front of an old rail car at Depot Park Museum. Our guide shared historical facts as we stood in a shaded area with Sonoma breezes. The City of Sonoma owns the Old Northwestern Pacific Depot, pictured above. The historic train was destroyed by a fire in 1975, yet the Society held a fundraiser to rebuild the Depot which is now a museum free to the public. The land across from the rail car is Depot Park. There are three temporary exhibits each year at the Depot Park Museum.

Who doesn’t love cheese? Our next stop on the walking tour was Vella Cheese which began in 1931. The visit included multiple samples of cheese such as Habanero, horseradish, rosemary jack, pesto jack, garlic jack and more. Vella cheeses are used as an ingredient, sprinkled on top of your favorite dish or served with crackers and wine. The cheeses are all natural, made with only 1% salt. The hard cheese that we purchased could be stored outside of the refrigerator for up to 7 days. Be sure to purchase some to take home! The habanero dry jack was our favorite! We grate it on top of salad.

Vella Cheese uses the finest quality ingredients to include herd breeding, feed, milking and transporting of the milk. The cheeses are quite unique in flavor, texture and variety. It was the perfect second stop on the tour, right after wine and pizza. Mia does a fantastic job of describing each cheese prior to the tasting. It was our first time attending a cheese tasting.

On our stroll over to the mission, we stopped and viewed some vineyards and took in the aroma of California Pepper trees. It was our first time seeing a pepper tree and until that point, we didn’t realize pepper grew on trees. The California Pepper tree naturalized in Southern California and they grow rapidly to about 40 feet tall and branches just as wide. The trees have a unique appearance, lacy because of the compound, pinnate leaves. The leaves, which grow up to 12 inches long, are what gives off the peppery aroma. An added benefit to taking part in a walking tour versus a train or trolley~ stopping along the way, discovering nature.

Next stop, a California mission! My husband and I grew up in California, where touring missions was something every student did in elementary school along with writing an essay and building a model. Our daughter, who was not raised in California, has never been to a mission so this was a wonderful addition to the tour. After the Sonoma Food Tour came to and end, we returned to the mission to look inside.

Mission San Francisco Solano was the 21st and final mission built in California. Built after Mexico gained independence from Spain, as the Governor’s wish was to have a strong Mexican presence on the Pacific coast. The Mission had a short life of just eleven years but was successful even though it had lower productivity than older missions in California. 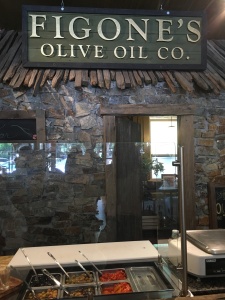 Ready for olive oil tasting at Figone’s? Our daughter had just returned from Italy and had been olive tasting in Lucca. This was the first time for my husband and I. Quite different from what we had expected. After all, olive oil tasting just doesn’t have the same intrigue of beer, wine, chocolate or cheese tasting. Surprisingly, they were very flavorful! Some tasting were that of salad dressing, while others were infused with herbs, great for fish or pasta. My favorites were the balsamic tastings! I had no clue that balsamic vinegar could be so sweet, made with strawberries, raspberries, chocolate, white peaches, pears, pomegranate, cinnamon, and figs. Some of Figone’s balsamics are sold to restaurants for making cocktails. Yum! 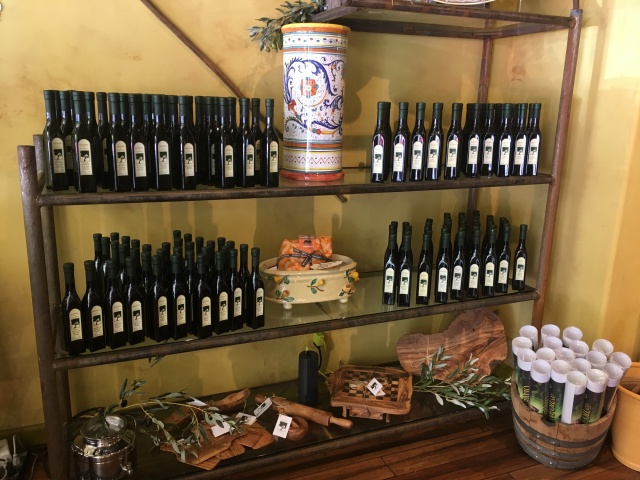 sign up to become a member of the “La Visione Club” and receive four shipments each year. Members will receive two 250ml club items of their choice upon joining. Items ship in March, June, September, and December. Choose one olive oil and one vinegar or two olive oils for $48. You may also choose two vinegars for $58. Take your time to browse around their gift shop and bring home small bottles of olive oil and balsamic as souvenirs or gifts.

Where to begin? We have traveled to Spain on more than one occasion as well as Mexico. Love, love Mexican cuisine! The dish served on the tour, Avocado Relleno, was deliciously unique with a surprisingly, healthy but bold, spicy flavor. I took the picture in hopes of recreating it. The dish is made with a whole avocado cut in half, topped with black beans, queso fresco and green chili. Served with salsa Fresca and chili pasilla sauce. The chips and salsa were fabulous and how could you go wrong when margaritas are served?

La Casa Restaurant is family owned, opened in 1967 and has turned into a Sonoma landmark. La Casa has a vivacious atmosphere, set in wine country and is popular amongst locals and visitors.

Final stop, saving the best for last, Wine Country Chocolates!! I didn’t take any pictures of the inside, probably because I was too preoccupied with sampling ganache in the chocolate tasting room. Enjoy tastings of raspberry and apricot ganache and several different types of chocolate ranging from milk to dark increasing in the percentage of cacao. You can even join their Truffle Club and have delectables sent to your door! Sign me up. It was a perfect ending to a great day! 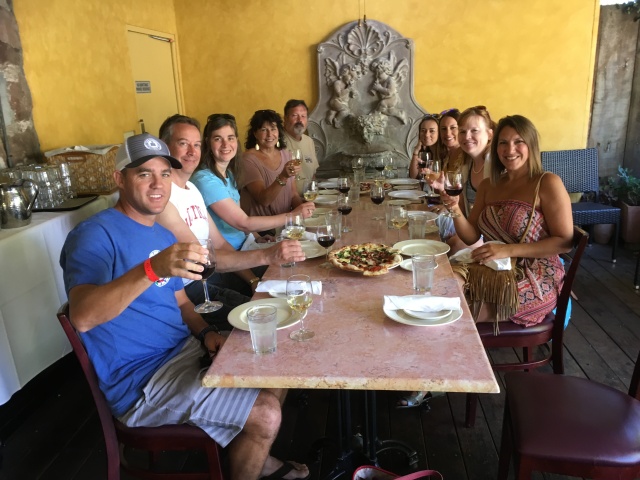 $$ Saving Tips~ With each blog post that I write, there are always $$ saving tips included. The tour guide brings along a small bottled water (8 oz.) for each guest. If you feel that you want more water, I would recommend bringing along your own bottle. We definitely needed water during the cheese sampling as some cheese were hot. It was also a warm day in July. I recommend bringing along a small bag to put items purchased in. There are gift shops at the cheese company as well as the olive oil and chocolatier shops. You cannot beat the value for the price of $89! Most of the wine trains we looked at were well over $100 plus you have to pay at each winery for the sampling. This tour included all the food, drinks and samples plus historical information over a 3 hour period. Be sure to tip your guide! Mia is fantastic and even emailed us a some photos of our family from the tour.

Reserve your tour at https://www.sonomafoodtour.com/